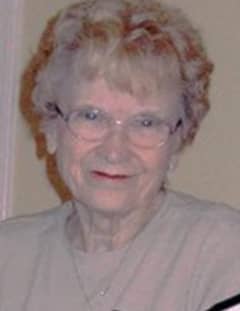 Mrs. Ida Hamlett Cannon, age 90, of Lithia Springs, Georgia, formerly a longtime resident of Decatur, passed away Friday, July 3, 2015. She was born March 18, 1925 in Fairburn, Georgia, the daughter of the late Mrs. Carrie McGarity and Liger Byrd Hamlett. Mrs. Cannon was a homemaker until her children were grown and then she returned to work and retired from Grady Hospital where she worked in residence administration. Ida was a lifelong Methodist and was an active member of Trinity United Methodist Church in Mableton. She was preceded in death by her parents; her husband of 55 years, Silas Pickens Cannon; brother, Wilson Hamlett; and sisters, Frances Hardin and Katherine Scroggins. She is survived by her daughters, Julie Hudson and her husband, Sam of Douglasville and Kellie Holbrook and her husband, Wayne of Johns Creek; grandchildren, William Silas Corley of Peachtree City, Rachael Cannon Corley of Johns Creek; sister, Dot Thomason and husband, Walt of Douglasville; sister-in-law, Marialis Hamlett of Albany; several nieces and nephews and their children; and many dear friends. The family will receive friends at Jones-Wynn Funeral Home in Douglasville, Sunday, July 5, 2015 from 1:00 PM until 3:00 PM. Funeral Services will be conducted Sunday, July 5, 2015 at 3:00 PM at the Chapel of Jones-Wynn Funeral Home in Douglasville with Father Brandon Duke officiating. Interment will follow at the West Family Cemetery. In lieu of flowers, contributions in memory of Mrs. Cannon may be made to Hospice Advantage, 300 Chastain Center Blvd, Suite 345, Kennesaw, Georgia 30144. Messages of condolence to the family may be sent at www.jones-wynn.com. Jones-Wynn Funeral Home & Crematory of Douglasville is in charge of arrangements. 770-942-2311

Honor the life of Ida Cannon

Please share a condolence, photo or memory of Ida. We welcome all condolences that are positive and uplifting that will help family and friends heal.