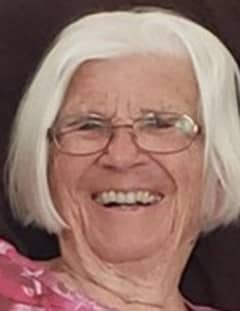 Mrs. Hedwig “Heidi” Henderson, age 92, of Douglasville, passed away Tuesday, October 1, 2019. She was born October 12, 1924 in Tarnau, Germany, the daughter of the late Mr. Vinzenz Patolla and the late Mrs. Joanna Passon Patolla. She was a homemaker, who enjoyed playing Bingo and crocheting in her spare time. Mrs. Henderson was of the Catholic faith and very involved at St. Marys of the Desert Catholic Church in Rosamond, California before moving to Georgia. In addition to her parents, she was preceded in death by her husband, Henderson B. Henderson and her numerous brothers and sisters. Mrs. Henderson is survived by her daughter and son-in-law, Christine and Claude Norwood of Douglasville; her grandchildren, Carleen and Larry Hutto of Orange Beach, Alabama and Cary and Kim Norwood of Hiram; and her great grandchildren, Hunter Hutto, Brittany and Mitchell Young, Amanda and Caleb Butler and Nicholas Norwood. According to Mrs. Hendersons wishes, she will be cremated and inurned with her husband in Riverside Cemetery in Riverside, California. Messages of condolences may be sent to the family at www.jones-wynn.com. Jones-Wynn Funeral Home and Crematory of Douglasville in charge of arrangements. 770-942-2311

Please share a condolence, photo or memory of Hedwig “Heidi”. We welcome all condolences that are positive and uplifting that will help family and friends heal.