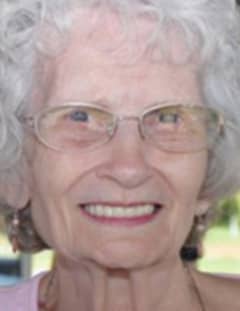 Mrs. Grace Harmon VanDorsten, 85, of Carrollton, Georgia, formerly of Douglasville, passed away Thursday, May 11, 2017. She was born April 2, 1932 in Atlanta, Georgia, the daughter of the late Mr. Edwin Lawton Fanning, Sr. and the late Mrs. Louise Augusta Borowsky Fanning. She was a homemaker and of the Baptist Faith. She enjoyed cooking for her family and was especially appreciated for her cakes. She enjoyed traveling. She loved Gospel and Bluegrass Music. In addition to her parents, she was preceded in death by her first husband, Howard F. Harmon, Sr.; second husband, Frank Van Dorsten; daughter-in-law, Joan Parrish Harmon; four sisters and three brothers. She is survived by two daughters and a son-in-law, Harriett Harmon McAdams and her husband, Don McAdams and Marsha Harmon Tomlinson all of Douglasville; four sons and daughters-in-law, Franklin Harmon of Douglasville, Roger and Carolyn Harmon of Carrollton, Darrell and Cindy Harmon of Carrollton and Terrell and Tracy Harmon of Rockmart; nine grandchildren, Ryan Harmon, Amy McAdams Stacey, Chad McAdams, Courtney Robinson, Jessica Bruhmuller, Daysha Harmon, Adam Smith, Justin Childress, and Cody Harmon; sixteen great-grandchildren; several nieces and nephews; and three step-children also survive. The family will receive friends at Jones-Wynn Funeral Home in Douglasville, Friday, May 12, 2017 from 5:00 PM until 8:00 PM. Funeral Services will be conducted Saturday, May 13, 2017 at 1:00 PM at the Chapel of Jones-Wynn Funeral Home in Douglasville with Deacon Tony Lee officiating. Interment will follow at Holly Hill Memorial Park in Fairburn. Messages of condolence to the family may be sent at www.jones-wynn.com. Jones-Wynn Funeral Home & Crematory of Douglasville is in charge of arrangements. 770-942-2311

Honor the life of Grace VanDorsten

Please share a condolence, photo or memory of Grace. We welcome all condolences that are positive and uplifting that will help family and friends heal.