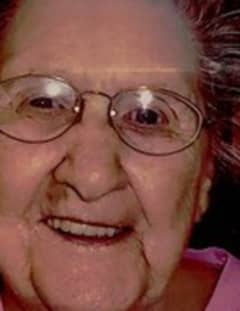 Mrs. Goldie Marie Thompson Oyler, age 103, of Villa Rica, passed away, Wednesday, September 12, 2018. She was born November 20, 1914 in Akron, OH the daughter of the late Mr. George Thompson and the late Mrs. Minnie Thompson. Mrs. Oyler was a homemaker, who loved her grandchildren. She had taken care of her late husband, which was very important to her. In addition to her parents, she was preceded in death by her husband, Ezra Soloman Oyler; granddaughter, Christina Gipson; numerous brothers and sisters. She is survived by her sons and daughters-in-law, Richard and JoAnn Oyler of Villa Rica, Robert and Louise Oyler of Kingsport, TN; grandchildren, Scott and Amy Oyler of Lithia Springs, Debbie and Ronnie Taylor of Columbus, OH, Robert and Connie Oyler of Kingsport, TN, Danny and Lisa Oyler of Pennsylvania; several great-granchildren also survive. Graveside services will be conducted Wednesday, September 19, 2018 at 3:00 PM from Roselawn Memory Gardens in Johnson City, TN. Interment will follow at Roselawn Memory Gardens. Messages of condolence may be sent to the family at www.jones-wynn.com. Jones-Wynn Funeral Home, Inc. and Cremation Services of Villa Rica in charge of arrangements. 770-459-3694

Honor the life of Goldie Oyler

Please share a condolence, photo or memory of Goldie. We welcome all condolences that are positive and uplifting that will help family and friends heal.