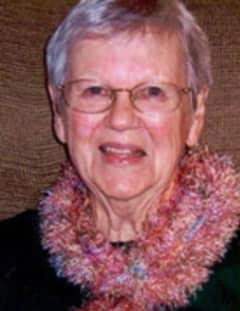 Mrs. Gloria Claire Larsson Ewans, 92, of Villa Rica, Georgia, formerly of Lithia Springs, Georgia, passed away Wednesday, February 25, 2015. She was born August 11, 1922 in New York. She retired as a legal secretary and worked as a secretary at State Farm Insurance. She was involved in the Golden Years in Douglasville and was a member of the Elks Lodge. She was a member of the American Legion for many years and was very supportive of the Senior Citizens Programs in Douglas County. In addition to her parents, she was preceded in death by one sister and two brothers. She is survived by two daughters and sons-in-law, Virginia and Dave Anderson of Villa Rica and Barbara and John Wood of Lithia Springs; son, Richard C. Ewans, Jr. of New Hampshire; four grandchildren, Greg Hubbell, Brian Hubbell, Erik Wood, and Jennifer Love; five great-grandchildren, Jacob, Will, Jackson, Brady, and Marc; several nieces and nephews. The family will receive friends at Jones-Wynn Funeral Home in Douglasville, Sunday, March 1, 2015 from 3:00 PM until 4:00 PM. Memorial Services will be conducted Sunday, March 1, 2015 at 4:00 PM at the Chapel of Jones-Wynn Funeral Home with Rev. Derek Porter officiating. According to the familyâs wishes, the body was cremated. In lieu of flowers, memorial contributions may be made to Sibley Heart Center Cardiology, 2835 Brandywine Road, Suite 300, Atlanta, Georgia 30341. Messages of condolence to the family may be sent at www.jones-wynn.com. Jones-Wynn funeral Home & Crematory of Douglasville is in charge of arrangements. 770-942-2311

Honor the life of Gloria Ewans

Please share a condolence, photo or memory of Gloria. We welcome all condolences that are positive and uplifting that will help family and friends heal.