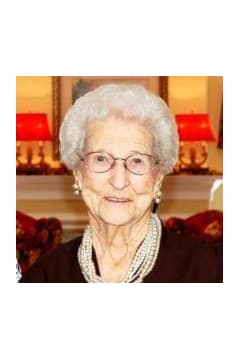 Mrs. Gladys Louise Baggett Daniell, age 96, of Douglasville, Georgia passed away Thursday, August 2, 2012 at Wellstar Tranquility Hospice. She was born August 10, 1915 the daughter of the late Mr. Howard Ray Baggett and the late Mrs. Willie Dodson Baggett. She retired from Sears Roebuck in Atlanta. She was a member of Heritage Baptist Church in Douglasville where she attended the Believer Sunday School Class. She was the oldest living charter member of the Eastern Star of Douglasville and she was a member of the Douglas County Senior Club Recycled Teenagers, Pioneers from Heritage and Keenagers from the First Baptist Church. She shared the honor of being the 2012 Oldest Senior Woman attending for Douglas County and was presented the Key to the City from the City of Douglasville at the annual Douglas Senior Picnic. She was a loyal and avid Atlanta Braves fan. She was a Proverbs 31 Woman who was a blessing to all that knew her. She was devoted to her family and was a loving wife, mother, grandmother, sister and friend. In addition to her parents, she was preceded in death by her husband, Robert Edward Daniell; sisters, Mary Baggett Ayers and brother, Russell Baggett. She is survived by her two daughters and son-in-law, Peggy Furr of Douglasville and Jane and Bob Yancey of Douglasville; sister, Dot Hamrick of Winston; sister-in-law, Bea Baggett of Douglasville; six grandchildren and their spouses, Brenda and Ted Leak of Tarpon Springs, FL, Thomas and Lori Furr of Douglasville, Ronnie and Lisa Furr of Villa Rica, Danny and Lisa Yancey of Douglasville, Robby and Tami Yancey of Douglasville, Chris and Emily Yancey of Marietta; twelve great-grandchildren; one great-great grandchild; several nieces and nephews. The family will receive friends at Jones-Wynn Funeral Home, Douglas Chapel Saturday, August 4, 2012 from 5:00 PM until 9:00 PM and Sunday, August 5, 2012 from 12:00 PM Noon until the funeral hour. Funeral Services will be conducted Sunday, August 5, 2012 at 2:00 PM from the Chapel of Jones-Wynn Funeral Home in Douglasville with Rev. Gene Fields officiating. Interment will follow at Ephesus Cemetery in Winston. The following will serve as pallbearers: Danny Yancey, Robby Yancey, Chris Yancey, Thomas Furr, Ronnie Furr, and Ted Leak. Those desiring to do so may make memorial contributions in memory of Mrs. Daniell to Heritage Baptist Church, 8800 Rose Avenue, Douglasville, Georgia 30134 or Wellstar Tranquility Hospice, 4040 Hospital West Drive, Austell, Georgia 30106. Messages of condolence may be sent to the family at www.jones-wynn.com. Jones-Wynn Funeral Home, Inc., Cremation Service and Memorial Gardens of Douglasville in charge of arrangements. 770-942-2311

Honor the life of Gladys Daniell

Please share a condolence, photo or memory of Gladys. We welcome all condolences that are positive and uplifting that will help family and friends heal.