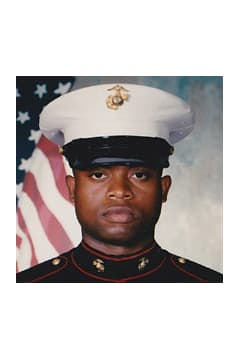 Sgt. Gardy Augustin was born on January 29, 1975 in Port-au-Prince, Haiti to Daniel Augustin and Miralia Michel. He departed this life unexpectedly on Wednesday, November 9, 2016 in Douglasville, Georgia from injuries sustained in a motorcycle accident. Sgt. Augustin graduated from Uniondale High School LI, NY in 1994 and not long after graduation he entered into the United States Marine Corp. He served as an active duty Marine and received an honorable discharge, before reentering into the United States Military as a National Guardsman and remained serving until his untimely death. Sgt. Augustin is survived by his beloved Wife, Michelle; Two Sons, Elijah Augustin and Joseph Augustin both of New York; One Daughter, Cassandra Augustin of New Jersey; One Bonus Daughter, Tiffany of Georgia; His Mother, Miralia Michel of New York; His Father and Bonus Mother, Daniel and Julie Augustin of New York; Two Sisters, Diana Augustin and Sheila Crittenden (Dontae) of Florida; Two Brothers, Patrick Augustin and Lesly Augustin (Crystal) of New York; One Grandchild, JaMeir; a host of Uncles, Aunts, Cousins; and numerous Nephews and Nieces. Sgt. Augustinâs family will receive friends at Jones-Wynn Funeral Home in Douglasville, Saturday, November 19, 2016 from 1:00 PM until 2:00 PM. Funeral Services will be conducted Saturday, November 19, 2016 at 2:00 PM at the Chapel of Jones-Wynn Funeral Home in Douglasville. Messages of condolence to the family may be sent at www.jones-wynn.com. Jones-Wynn Funeral Home & Crematory of Douglasville is in charge of arrangements. 770-942-2311

Honor the life of Gardy Augustin

Please share a condolence, photo or memory of Gardy. We welcome all condolences that are positive and uplifting that will help family and friends heal.