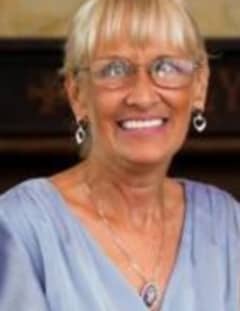 Mrs. Linda Gale Freeman Moody, age 56, of Griffin, Georgia passed away Sunday, August 26, 2012 at Emory University Hospital. She was born August 25, 1956 in Austell, Georgia the daughter of the late Mr. Charles Olin Freeman and the late Mrs. Eva Myrtis Parris Freeman. She was of the Baptist Faith. She operated a daylily business. She was devoted to her family and friends. She is survived by her husband, Philip Douglas Moody of Griffin; one daughter and son-in-law, Eva Nicole and Steve Brown of Reno, Nevada; one step-daughter, Ashley Wight of Ft. Myers, FL; two stepsons, Todd Moody of Jackson, MS and Greg Moody of Huntsville, AL; sister and brother-in-law, Elizabeth Freeman and James Brown of Douglasville; 8 grandchildren; nieces, Desiree Cook and Leah Goen; great-nephew, Payton Goen.The family will receive friends at Jones-Wynn Funeral Home, Douglas Chapel Friday, August 31, 2012 from 4:00 PM until 6:00 PM. A Celebration of Life Service will be conducted Friday, August 31, 2012 at 6:00 PM at the Chapel of Jones-Wynn Funeral Home. According to the familyâs wishes, her body was cremated. Messages of condolence may be sent to the family at www.jones-wynn.com. Jones-Wynn Funeral Home, Inc., Cremation Service and Memorial Gardens of Douglasville in charge of arrangements. 770-942-2311

Honor the life of Gale Moody

Please share a condolence, photo or memory of Gale. We welcome all condolences that are positive and uplifting that will help family and friends heal.