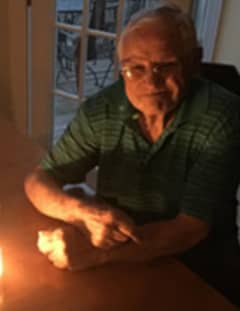 Mr. Floyde Clyde Fitch, Jr., 79, of Douglasville, Georgia passed away Thursday, May 11, 2017 at Wellstar Kennestone Hospital. He was born April 4, 1938 in Montpelier, Vermont, the son of the late Mr. Floyde Clyde Fitch, Sr. and the late Mrs. Beatrice Irene Martin Fitch. He was a veteran of the United States Army. He enjoyed outdoor activities and was a founding member of The Mountain Tamers Snowmobile Club. He worked as a UPS Driver before retiring after 28 years of service. After retiring and moving to Georgia, he worked for Douglas County Parks and Recreation. He also drove the bus for the Midway United Methodist Church After School Program for over 10 years. He was a member of Midway United Methodist Church for 21 years. He is survived by his wife, Sherry Edson Fitch of Douglasville; two daughters, Shari Fitch and her partner, Kadyn of Calais, VT and Toni Aybar and her husband, Jeffrey of Douglasville, GA; three brothers and sisters-in-law, David and Marjorie Fitch of Woodbury, VT, Randall and Lesley Fitch of Calais, VT, and Cedric and Susie Fitch of Venice, FL; two grandchildren, Alexander Aybar and Evan Aybar; several nieces, nephews, brothers-in-law and sisters-in-law; and beloved Bassett Hound, Molly. The family will receive friends at Jones-Wynn Funeral Home in Douglasville, Monday, May 15, 2017 from 3:00 PM until 4:00 PM. Memorial Services will be conducted Monday, May 15, 2017 at 4:00 PM at the Chapel of Jones-Wynn Funeral Home with Rev. Frank Boone, Rev. Francisco Artley, and Rev. Kenneth Stevens officiating. A Graveside Service will be held at Robinson Cemetery in Calais, VT, in June. In lieu of flowers, donations can be made in his name to the American Heart Association. Messages of condolence to the family may be sent at www.jones-wynn.com. Jones-Wynn Funeral Home & Crematory of Douglasville is in charge of arrangements. 770-942-2311

Honor the life of Floyde Fitch

Please share a condolence, photo or memory of Floyde. We welcome all condolences that are positive and uplifting that will help family and friends heal.