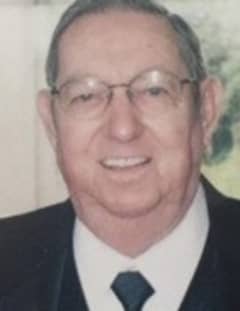 SFC Eugene Leonard McCrary, age 84, of Villa Rica, Georgia passed away Wednesday, August 24, 2016. He was born August 21, 1932 in Fruithurst, Alabama, the son of the late Mr. Eugene W. McCrary and the late Mrs. Leila McCrary. He was a retired veteran having served in the United States Army. He served two tours in the Korean War and in the Vietnam War. He retired as an inspector for the City of Douglasville. He loved spending time with his family. He was an avid golfer and loved to travel. In addition to his parents, he was preceded in death by his wife, Rose Ann Massorotti McCrary; stepmother, Mary Lou McCrary; daughter, Tammy Bowker; sisters, Sarah McCrary and Margaret Ruth Larkin; and a brother, George âBuddyâ McCrary. He is survived by his children, Jeffrey and Tammy McCrary of Buchanan, Michael and Rhoanda McCrary of Villa Rica, and Debra McCrary Clefisch of Villa Rica; six grandchildren and their spouses, Marti and Jason Webb of Villa Rica, Blake Clefisch of Villa Rica, Alicia and TJ Williams of Douglasville, Brittany and Ryan Wham of Clarksville, Tennessee, Christy Johnson of Searcy, Arkansas, and Jessica McCrary of Buchanan; eight great-grandchildren, Landon Webb, Logan Webb, Lucas Webb, Paisley Williams, Lakeyn Williams, Baylee Wham, Jada King, and Isabella Vaughn; many nieces and nephews. The family will receive friends at Jones-Wynn Funeral Home in Villa Rica, Sunday, August 28, 2016 from 2:00 PM until 6:00 PM. Funeral Services will be conducted Monday, August 29, 2015 at 11:00 AM at the Chapel of Jones-Wynn Funeral Home in Villa Rica with Dr. Kevin Williams officiating. Interment will follow Monday, August 29, 2016 at 2:30 PM at Georgia National Cemetery in Canton. Messages of condolence to the family may be sent at www.jones-wynn.com. Jones-Wynn Funeral Home and Cremation Services of Villa Rica is in charge of arrangements. 770-459-3694

Honor the life of Eugene McCrary