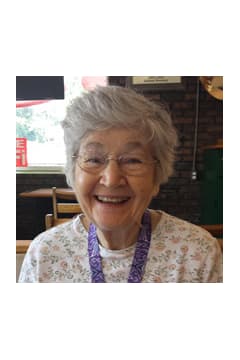 Mrs. Elizabeth âBettyâ Margaret Grant Pawlowski, age 87, of Douglasville, Georgia, our beloved mother, passed away Thursday, January 12, 2017 at Douglasville Nursing and Rehabilitation Center. She was born October 16, 1929 in Waterbury, Connecticut the daughter of the late Elizabeth Mary Osier Grant and the late Harry Arthur Grant. She was of the Catholic Faith and was a member of the Council of Catholic Women. Her ever present smile, her laughter and light hearted spirit will be missed by all who knew her. She was also preceded in death by her husband, Edwin Pawlowski who she married July 3, 1952 as well as her son Gary Pawlowski. She is survived by her son and his beloved, Curtis Pawlowski and Donis Rasmussen of Norman, Oklahoma; daughter and son-in-law, Patricia and David Martin of Douglasville, Georgia; grandchildren Joshua and Courtney Martin, Allison and Caleb Brown; great-grandchild Jack Robert Brown and sister, Lorraine Blazys of Watertown, Connecticut. A Funeral Mass will be held at St. Theresa Catholic Church, 4401 Prestley Mill Road in Douglasville at 10:30 AM Friday, January 20, 2017. Her cremated remains will be buried in the Resurrection Garden at St. Josephâs Catholic Church in Marietta. In lieu of flowers, please make a donation to your favorite charity. Messages of condolence to the family may be sent at www.jones-wynn.com. Jones-Wynn Funeral Home & Crematory of Douglasville is in charge of arrangements. 770-942-2311

Honor the life of Elizabeth Pawlowski

Please share a condolence, photo or memory of Elizabeth. We welcome all condolences that are positive and uplifting that will help family and friends heal.