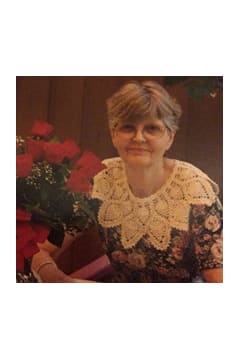 Mrs. Edna Gibson Newberry, age 83, of Temple, passed away, May 5, 2017. She was born September 17, 1933 in Ramer, AL the daughter of the late Mr. Arthur Lee Gibson and the late Mrs. Montine Missildine Gibson. Mrs. Newberry was a homemaker. She was a member of First Baptist Church of Temple. She loved playing the piano and was a loving daughter, sister, wife, mother, grandmother and great grandmother. In addition to her parents, she was preceded in death by her husband, Charles Edward Newberry; brother, James Fred Gibson. She is survived by her daughters and sons-in-law, Susan and Phil Taylor of Temple, Deborah and James McMichen of Powder Springs; grandchildren, Jaime McMichen Allison, Erin Taylor Whigham and Lindsey Taylor Gossett, and Jeremy McMichen; four great grandchildren, Anders Allison, Raleigh Allison, Abel Allison, and Josiah Whigham; sister-in-law, Delle Gibson; several nieces and nephews also survive. The family will receive friends at Jones-Wynn Funeral Home in Villa Rica Tuesday, May 9, 2017 from 12:00 PM until 1:00 PM. Funeral Services will be conducted Tuesday, May 9, 2017 at 1:00 PM from the Chapel of Jones-Wynn Funeral Home with Chaplain Sam Braswell officiating. Interment will be at Kennesaw Memorial Park in Marietta. In lieu of flowers the family asks that donations be made to Billy Graham Evangelistic Association, 1 Billy Graham Parkway, Charlotte, NC 28201 or your local Salvation Army.Messages of condolence may be sent to the family at www.jones-wynn.com. Jones-Wynn Funeral Home, Inc. and Cremation Services of Villa Rica in charge of arrangements. 770-459-3694

Honor the life of Edna Newberry