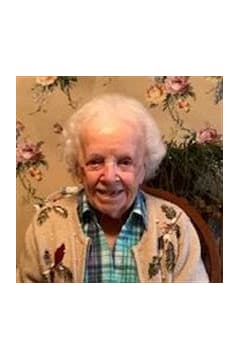 For the first time in over 100 years, the sun has risen and set on a day without the living presence of Dorothy Constance King Mygatt. Dot Mygatt began her life with God on January 27, 2019. She began her life on earth on June 5, 1918. Dot was the fourth of five daughters of Andrew Garner King and Barbara Loehr King, and grew up in Glendale, Queens, New York. She was a child of the Depression, and despite the difficulties of that era, she always spoke of what her family had instead of what they did not have. For example, she remembered her father, who was an accountant for the Pennsylvania Railroad, bringing home fresh Florida oranges from the railroad loading docks. It was because of her experiences during the Depression and World War II that Dot always appreciated the little things in life. This gift of finding pleasure in simple things is only one of the many traits that endeared her to everyone she met. Dot Mygatt graduated from Richmond Hill High School in 1936 and attended secretarial school after graduation. The skills she learned there served her well all of her life. It was never a problem for her to obtain a job. In 1945, while she was volunteering for an agency helping sailors through New York City, she met Lucien Lugand Mygatt of Athens, Georgia. They were married on October 5, 1946. In the 1960s, Dot obtained her real estate license and worked as a real estate agent for many years for Ray Mitchell Realty Company in southwest Atlanta. She later became a successful real estate broker for Ray Mitchell when being a broker was largely an occupation held by men. She retired in the 1980s and was amazed and happy to see that many women have followed in her footsteps. She was always a positive and inspiring role model for everyone who knew her – especially her daughter. In 1977, Dot moved to Douglasville, GA and lived there happily until 2016 when she moved to Newborn, GA to live with her daughter and son-in-law. She was an active member of the First Presbyterian Church of Douglasville and the Douglas County Senior Citizens for many years. While living in Newborn, she attended Monticello Presbyterian Church when she was able. Her affiliation with each of these organizations brought her great joy and happiness and many friends. Dot made friends easily everywhere she went. Her sweet and selfless spirit was obvious to everyone who met her – just as obvious as her beautiful smile and bright blue eyes. Dot was predeceased by her husband, Lucien Lugand Mygatt, by her parents, Andrew and Barbara King, by her sisters Anna King Olson, Magdaline King Marz, Elvina Frances King, and Ruth King Mance alt of New York, and by many treasured friends. Despite these deaths that caused her great sorrow, she was still able to find great joy in life with the help of God and her family and friends. Dot Mygatt is survived by her daughter and son-in-law, Barbara Anne Mygatt Robbins and Dan Robbins of Newborn, GA, her son and daughter-in-Iaw, George and Kathi Mygatt of Smyrna, GA, grandson Matt Robbins and his wife Lisa of Conyers, GA, granddaughter Tina Robbins Spencer and her children Justin and Tyler of Raleigh, NC., grandson Justin Garner Mygatt and his wife Elisabeth Putney Mygatt and their sons Harrison and Marshall of Cabin John, Maryland, grandson Tarver Braden Mygatt of Smyrna, and granddaughter Kendyl Mygatt Barrett and her husband Aaron Barrett and their daughter Kollyns Barrett of Smyrna, GA, niece Susan Gearhart and her husband, Jeff, nephew Jim Mance, and niece Ruth Bonsick and her husband, Bob all of New York. Countless friends of all ages are also left to mourn the passing of this truly exceptional and great lady. Visitation will be held at 2:00 Saturday, February 2 at the First Presbyterian Church of Douglasville – 9190 Campbellton Street, Douglasville, GA. A memorial service, officiated by Pastor Andrew Dickinson, will immediately follow the visitation at 3:00.. The family would like to thank each of the caregivers at the swing bed at Jasper County Memorial Hospital and the Retreat Nursing Home in Monticello, GA who cared for Dot so lovingly and tenderly during her final days. Each person there has made this sad time more tolerable. Even in times of sorrow, God provides blessings to help us through. Each of these caregivers was a true blessing. We are all grateful for their support, expertise, compassion, and love. We would also like to thank Jones-Wynn Funeral Home and Crematory in Douglasville, GA for their care and tender guidance during this difficult time. In lieu of flowers, the family requests that memorial donations be made to Monticello Presbyterian Church (246 East Washington Street, Monticello, GA 31064), or the First Presbyterian Church of Douglasville, or the charity of your choice.Messages of condolences may be sent to the family at www.jones-wynn.com. Jones-Wynn Funeral Home and Crematory Douglasville is in charge of the arrangements. 770-942-2311.

Honor the life of Dorothy Mygatt