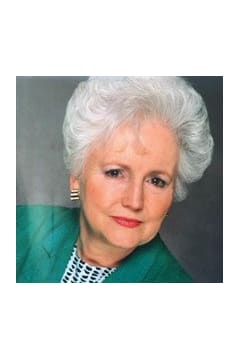 Mrs. Dorothy Christine Farr Coker, affectionately known to most as Dot, passed away at age 84 on September 4th, 2019 at her home in Villa Rica. Mrs. Coker was born in Villa Rica, Georgia on September 20, 1934, the daughter of Rader Jefferson Farr and Martha Spinks Farr. She graduated from Villa Rica High School in 1952, where she was captain of the cheerleading squad and participated in several activities. In the mid 1980s, Dot decided she would go back to college. In 1992, at the age of 58, she received her bachelors degree from Georgia State University. She spent most of her professional career with Johnson & Higgins Insurance Brokers in Atlanta, Georgia, where she was elected to the position of Vice-President of Human Resources. She retired in 1996 from J&H to take care of her ailing mother, but stayed active in part-time work for another 20 years at Walmart locations in Douglasville and Villa Rica until finally retiring for good in 2017. She was a Sunday school teacher and long-time member of Fullerville Baptist Church in Villa Rica. Most of all, she loved her family and instilled strong values that have served her family well. She will be dearly missed, and forever in our hearts. Predeceased by her brother Donald Farr, and sisters Betty Smallwood and Maxine Fields, Mrs. Coker is survived by her brothers, Jeff Farr and Roger Farr, and her sister, Marvene Bice. Dot Coker lived a full life as a wonderful mother, grandmother, and great-grandmother. She was the mother of Beverly Denise Poynter of Carrollton, Georgia, and Perry O. Coker Jr. of Douglasville, Georgia. Her grandchildren include Anna Poynter Upshaw of Winston, and Chase Coker and Christina Coker of Douglasville. She was the Mother-in-law of Tracy Marie Coker, and the Grandmother-in-law of Brandon Upshaw. Great-grandchildren include Luke Vaughan and Gabriella Upshaw. On most Saturday mornings, you would find Dot attending sporting and other events for her grandchildren and great-grandchildren. Visitation will be held Monday, September 9, 2019 from 6:00PM to 8:00 PM at Jones-Wynn Funeral Home, 306 Westview Drive, Villa Rica, Georgia 30180. The funeral service will be conducted at 2:00 PM on Tuesday, September 10, 2019 at Fullerville Baptist Church, 423 Old Town Road in Villa Rica, Georgia. In lieu of flowers, the family has requested that donations be made In Memory of Dorothy Coker to the Fullerville Young at Hearts Club, c/o Fullerville Baptist Church, 423 Old Town Road, Villa Rica, Georgia 30180. Messages of condolences may be sent to the family at www.jones-wynn.com. Jones-Wynn Funeral Home and Crematory of Villa Rica is in charge of the arrangements. 770-459-3694