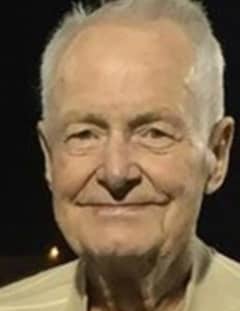 Mr. David Louis Kaiser, 84, of Douglasville, Georgia passed away Saturday, January 6, 2018. He was born April 26, 1933 in Baltimore, Maryland, the son of the late Mr. Karl Kaiser and the late Mrs. Marion Longfellow Kaiser. He married Judith Dziedzic on July 18, 1959 in Florida. He served in the National Guard. He retired after 47 years as a Cable Splicer for Bellsouth. He was a hard worker, and enjoyed helping others. He was a cat person, a car enthusiast and enjoyed tinkering. He was devoted to family and loved spending time camping with them. In addition to his parents, he was preceded in death by a brother, Karl Kaiser and sister, Joan Turman. He is survived by his wife of 58 years, Judy of Douglasville; a daughter and son-in-law, Susan and Glenn South of Fleming Island, FL; three sons and a daughter-in-law, David L. Kaiser, II of Atlanta, Christopher John and Kimberly Kaiser of Douglasville, and Stephen Kaiser of Douglasville; brother, Wayne Kaiser of Mitchellville, MD; five grandchildren and their spouses, Valerie and Major Steven Thompson of Albany, GA, Laura and Bryan Martin of Orange Park, FL, Kelly South of Fleming Island, FL, Catherine South of Fleming Island, FL, and Hannah Kaiser of Douglasville, GA; four great-grandchildren, Kyndall Martin, Elise Thompson, James Thompson, and Sadie Martin. Memorial Services will be conducted Saturday, January 13, 2018 at 3:00 PM at Central Baptist Church in Douglasville with Pastor Steve McFall officiating. In lieu of flowers, please make contributions in his memory to Cat Depot, 2542 17th Street, Sarasota, FL 34243. Messages of condolence to the family may be sent at www.jones-wynn.com. Jones-Wynn Funeral Home & Crematory of Douglasville is in charge of arrangements. 770-942-2311

Honor the life of David Kaiser