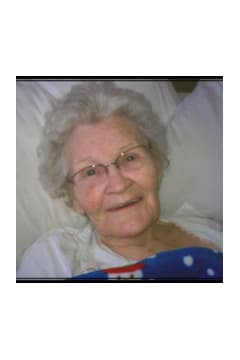 Mrs. Cora Booth Taylor, age 84, of Douglasville, Georgia passed away Monday, December 11, 2012. She was born August 4, 1928 in Madison County, Georgia the daughter of the late Mr. Artes Booth and the late Mrs. Lilly Graham Booth. She was a homemaker. Mrs. Taylor was a loving wife, mother, grandmother, and great-grandmother and devoted her life to her family. She was a member of Beulah Baptist Church. In addition to her parents, she was preceded in death by her beloved husband, William Wallace Taylor on December 27, 1999; daughter, Peggy Taylor; and two sisters and five brothers. She is survived by her daughters and sons-in-law, Carmen and Thomas Long of Douglasville, Loretta and John Presley of Fairmont, and Eleanor and Everett Moon of Douglasville; sister, Betty McCannon of Comer; seven grandchildren and their spouses, Jimmy and Sherri Moon of Cumming, Chris and Shannon Moon of Paulding County, Nathan Taylor of Hiram, Michelle and Kevin Collum of Calhoun, Amanda Baggett of Douglasville, Michael and Kayla Long of Temple, and Matthew and Sharley Long of Douglasville; twelve great-grandchildren; several nieces and nephews also survive. The family will receive friends at Jones-Wynn Funeral Home in Douglasville, Wednesday, December 12, 2012 from 4:00 PM until 8:00 PM and Thursday, December 13, 2012 from 9:00 AM until the funeral hour. Funeral Services will be conducted Thursday, December 13, 2012 at 1:00 PM from the Chapel of Jones-Wynn Funeral Home in Douglasville with Rev. Richard B. Long and Dr. Wayne Bray officiating. Musical selections will be provided by Terry Pearman, accompanied by Charlotte Lockhart. Interment will follow at Beulah Cemetery with the following serving as pallbearers: Jimmy Moon, Chris Moon, Zachary Collum, Nathan Taylor, Michael Long, Matthew Long and Will Moon. Messages of condolence may be sent to the family at www.jones-wynn.com. Jones-Wynn Funeral Home & Crematory, Inc. of Douglasville is in charge of arrangements. 770-942-2311

Honor the life of Cora Taylor

Please share a condolence, photo or memory of Cora. We welcome all condolences that are positive and uplifting that will help family and friends heal.