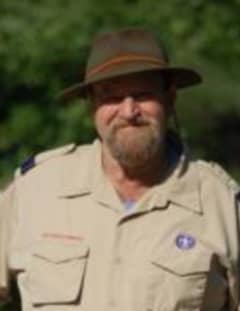 Mr. Charles âChuckâ Freemont Hanna, Jr., age 62, of Douglasville, Georgia passed away Wednesday, October 3, 2012 following an extended illness. He was born February 1, 1950 in Atlanta, Georgia. He was a U.S. Air Force Veteran. He married Vicki Cook on September 5, 1970 in Atlanta. He was a Christian raised in the Church of Christ. He worked at McCormick Corporation for 27 years. Mr. Hanna served as a girls softball coach for over 11 years and for several years as an umpire. In 1993, he began volunteering for Boy Scouts of America and over the years his dedication to the program helped shape countless young men. He was preceded in death by his mother, Evelyn Griffies Hanna. He is survived by his wife of 42 years, Mrs. Vicki Cook Hanna of Douglasville; daughter and son-in-law, Jennifer and Stephen Snow of Douglasville and son, John Ross Hanna of Douglasville; his father, Charles Freemont Hanna, Sr. of Douglasville; three sisters and their spouses, Susan and Roy Kilgo of Griffin, Linda and Randy Garner of Hiram, and Nancy Hanna-Briggs of St. Louis, MO; two grandchildren, Collin Snow and Nicholas Snow; nine nieces and nephews who held a special place in his heart. The family will receive friends at Jones-Wynn Funeral Home in Douglasville Saturday, October 6, 2012 from 4:00 PM until 7:00 PM. Memorial Services will be conducted Sunday, October 7, 2012 at 3:00 PM at Dorsett Shoals Baptist Church. According to the familyâs wishes, his body was cremated. In lieu of flowers, childrenâs books or monetary donations may be made in honor of Mr. Charles F. Hanna, Jr. to the Dog River Library, contact: Lindy Moore, County Librarian, 6100 Georgia Highway 5, Douglasville, Georgia 30135. The family encourages you to visit their Caring Bridge page at www.caringbridge.org/visit/chuckhanna Messages of condolence may be sent to the family at www.jones-wynn.com. Jones-Wynn Funeral Home & Crematory, Inc. of Douglasville is in charge of arrangements. 770-942-2311

Honor the life of Charles Hanna