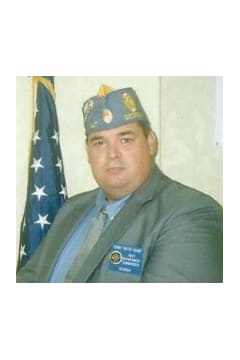 Butch Adams Mr. Henry Lee âButchâ Adams, age 47, of Douglasville, Georgia went to be with his Lord and Savior on February 17, 2012. He was born November 3, 1964. Butch is survived by his wife, Judy Waters Adams; stepson, Mark and Kate Hines; stepdaughter, Tahni and David Gerstenberger and beloved niece, Jennifer and Franklin Williamson; His 6 grandchildren, Amber and Daniel Hines, Michael Hinds, Gregory and Olivia Gerstenberger, and Bethany Williamson were the loves of his life. Father and stepmom, Bill and Johnnie Adams; brothers, Billy and Vickie, Brian and Jennifer Adams. Butch was a Mason at the Jonesboro Lodge. He was a veteran of the U.S. Army for 12 ½ years having served in Desert Storm, Lebanon, Grenada, and Panama. He was an active member of the American Legion serving as the State Commander 2009-2010. He served three terms as the Detachment Commander of the S.A.L. He currently served on the National American Legion Magazine Commission. Butch was an active member of the First Baptist Church of Douglasville where he sang in the choir. He was employed in management for AT&T. According to his wishes, his body was cremated. Memorial Services will be conducted Sunday, March 4, 2012 at 3:00 PM at the First Baptist Church of Douglasville with Dr. John Pennington officiating. In lieu of flowers contributions in memory of Butch Adams may be made to the First Baptist Church of Douglasville music ministry or the Upwards Sports Program, 5900 Prestley Mill Road, Douglasville, GA 30135. Messages of condolence may be sent to the family from www.jones-wynn.com. Jones-Wynn Funeral Home, Inc., Cremation Service and Memorial Gardens of Douglasville in charge of arrangements. 770-942-2311

Honor the life of Butch Adams

Please share a condolence, photo or memory of Butch. We welcome all condolences that are positive and uplifting that will help family and friends heal.