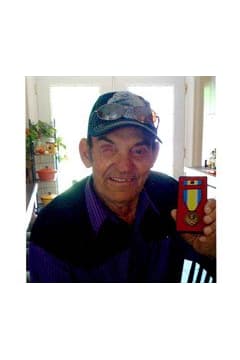 Mr. Billy G. McCray, age 82, of Lithia Springs, passed away Wednesday, February 04, 2015. He was born August 8, 1932 in Oneonta, AL the son of the late Mr. James E. McCray and the late Mrs. Hattie Mae Cline McCray. Mr. McCray served in the United States Army during the Korean War. He retired from the State of Georgia as a Park Ranger after many years. He was an active member of the American Legion and Am Vets in several of the local counties.In addition to his parents he was preceded in death by his wife, Wilma Janet Benson McCray; brothers, Gene McCray and Dick McCray; sisters, Mildred Gilliam and Ruth Chapman. He is survived by his daughters and son-in-law, Sherry Edgell of Douglasville, Cindy and Dwayne Martin of Lithia Springs, Christy McCray Keener of Lithia Springs; son, Scott McCray of Douglasville; sister, Ruby Nell Dickinson of Hampton; brother, Donny Mac McCray of Winder; eight grandchildren, four great grandchildren; several nieces and nephews also survive. The family will receive friends at Jones-Wynn Funeral Home in Douglasville, Friday, February 6, 2015 from 5:00 PM until 9:00 PM. Memorial Services will be conducted Saturday, February 7, 2015 at 2:30 PM from County Line Baptist Church with Rev. Dwayne Martin officiating. Interment will follow in Mt. Moriah Cemetery in Dallas. In lieu of flowers the family asks that contribution to be made to Billy G. McCray Funeral Fund, C/O Jones-Wynn Funeral Home, 2189 Midway Road, Douglasville, Georgia 30135. Messages of condolence may be sent to the family at www.jones-wynn.com. Jones-Wynn Funeral Home and Crematory of Douglasville in charge of arrangements. 770-942-2311

Honor the life of Billy McCray