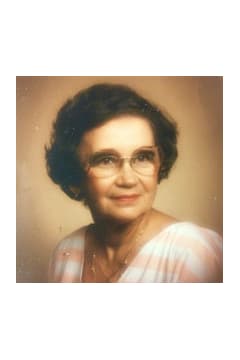 Mrs. Billie Gilstrap Bailey, 85, of Douglasville, Georgia passed away Monday, October 6, 2014. She was born June 23, 1929 in Milledgeville, Georgia the daughter of the late Mr. James Douglas Gilstrap and the late Mrs. Mattie Godard Gilstrap. She worked as the branch manager at Univis Optical. She was a Christian by faith, and a member of the Morning Glories. She enjoyed reading devotionals and sharing the love of Christ with everyone she met. She is survived by one son and daughter-in-law, Doug and Liz Bailey of Douglasville; three grandchildren and their spouses, Doug and Carrie Bailey, Justin and Rachel Bailey, and Adam and Crystal Bailey; seven great-grandchildren, Jacob, Coral, Laina, Oceane, Aiden, Kaitlyn, and Aubrey Bailey. The family will receive friends at Jones-Wynn Funeral Home in Douglasville, Sunday, October 19, 2014 from 1:00 PM until 2:00 PM. Memorial Services will be conducted Sunday, October 19, 2014 at 2:00 PM at the Chapel of Jones-Wynn Funeral Home in Douglasville. According to the familyâs wishes, the body was cremated. Jones-Wynn Funeral Home & Crematory of Douglasville is in charge of arrangements. 770-942-2311

Honor the life of Billie Bailey