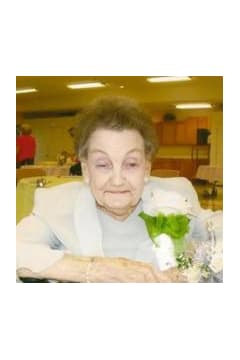 Mrs. Bessie Willene McEntyre Daniel, age 91, of Carrollton passed away Tuesday, March 27, 2012. She was born August 23, 1920 in Calhoun, Georgia the daughter of the late Mr. Jesse McEntyre and the late Mrs. Lela Jane Roberts McEntyre. She was a member of First Baptist Church of Villa Rica and was a member of the Sunshine Sunday School Class. Mrs. Daniel loved gardening, flowers, baking, church and taking care of her family. She was an avid Atlanta Braves fan. In addition to her parents she was preceded in death by her husband Joseph Jesse Daniel, brothers, Clyde McEntyre, Abner McEntyre, Wayne McEntyre, Roy McEntyre; sister, Ruth Muse and son-in-law, William Robert McEver. She is survived by her daughter, Gail McEver of Villa Rica; son and daughter-in-law, John and Sue Daniel of Villa Rica; five grandchildren, Jimmy Hefner of Rocky Face, Dana and Dan Trowell of Dalton, Chris Daniel of Atlanta, Angie and Louis Gore of Villa Rica, and David Daniel of Carrollton; three great grandchildren, Tucker Boyd Trowell, Jillian Jeanette Trowell and Patrick Joseph Daniel. Several nieces and nephews also survive. The family will receive friends from Jones-Wynn Funeral Home of Villa Rica, Thursday, March 29, 2012 from 5:00 PM until 8:00 PM. Funeral Services will be conducted Friday, March 30, 2012 at 11:00 AM from the chapel of Jones-Wynn Funeral Home of Villa Rica with Rev. Jeff Powell officiating. Interment will follow at Melrose Hills Memorial Garden. Those who desiring to do so may make contribution to the First Baptist Church of Villa Rica Building Fund, 1483 West Highway 78, Villa Rica, Georgia 30180. Messages of condolence may be sent to the family from www.jones-wynn.com. Jones-Wynn Funeral Home, Inc., Cremation Services and Memorial Gardens of Villa Rica in charge of arrangements. 770-459-3694

My name is Melvin Helton and I want to say that Willene was a very dear friend to me. We both lived at the Hampton Court Apartments. We were the first to move into those apartments when they were newly built back in 1985. I used to help her with her flowers and enjoyed every minute of it. We used to sit out on her front porch and talk for hours. Those were some good days that I will always cherish. She will forever live on in my heart and memories. You could not ask for a better friend than Willene Daniel. She was the BEST!
– Melvin Helton