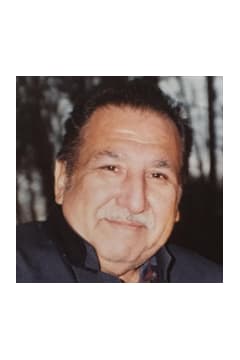 Mr. Aureliano Sanchez Riojas, 78, of Douglasville, Georgia passed away January 5, 2015 at his residence. He was born March 13, 1937 in San Antonio, Texas, the son of the late Mr. Francisco Carreon Riojas and the late Mrs. Louisa Angel Sanchez Riojas. He was a member of the Christian Missionary Alliance. He worked as a carpenter and served as a Pastor. In addition to his parents, he was preceded in death by his wife, Aurora M. Riojas; brothers, Frank Riojas and Richard Riojas. He is survived by three daughters and sons-in-law, Belia âBebeâ Riojas of Riverdale, Michelle and Clay Madsen of Social Circle, and Melissa and Johnny Carlisle of Douglasville; son and daughter-in-law, Carlos and Anita Riojas of Decatur; sister and brother-in-law, Anita and Charlie Perez of San Antonio, TX; 8 grandchildren; 1 great-grandchild; several nieces and nephews. A Memorial Service will be conducted at a later date in San Antonio, Texas. In lieu of flowers, memorial contributions may be made to Scleroderma Foundation, 300 Rosewood Drive, Suite 105, Danvers, MA 01923. Messages of condolence to the family may be sent at www.jones-wynn.com. Jones-Wynn Funeral Home & Crematory of Douglasville is in charge of arrangements. 770-942-2311

Honor the life of Aureliano Riojas

Please share a condolence, photo or memory of Aureliano. We welcome all condolences that are positive and uplifting that will help family and friends heal.