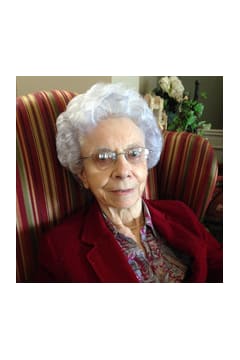 Mrs. Margaret Alyne Burgess Holland, 82, of Douglasville, Georgia passed away Sunday, November 9, 2014. She was born January 15, 1932 in Guymon, Oklahoma, the daughter of the late Mr. Harry S. Burgess and the late Mrs. Viola Mattocks Burgess. She married Andrew Don Holland on January 17, 1953 in Dallas, Texas. She worked as a bookkeeper at First National Bank of Douglasville. She had a gift for Wood Crafts. She and her late husband were the owners and operators of Wood âNâ You, providing handcrafted home décor. She was a gifted musician who delighted in playing the organ and piano at many churches. She was devoted to her beloved family and was a loving mother, grandmother, and great-grandmother. She attended West Metro Church of God. In addition to her parents, she was preceded by her husband of 55 years, Andrew Don Holland on March 8, 2008; and her brother, Harry Burgess. She is survived by her three daughters and sons-in-law, Andrea and Mark Cagiano of Douglasville, Kellie Hunter of Waco, and Karlene and Sandy Hinton of Acworth; sister, Irene Bauer of Guymon, OK; brother and sister-in-law, Bob and Shelly Burgess of Hooker, OK; six grandchildren and their spouses, Erin and Brandon Mann, Cara and Jamie Wynn, Ashley and Daniel McAlpine, Brandon and Terri Holland, Christal McCamy, and Michael Hunter; six great-grandchildren, Barrett, Bryson, Brynna, Mason, Owen, and Brady; several nieces and nephews. The family will receive friends at Jones-Wynn Funeral Home in Douglasville, Wednesday, November 12, 2014 from 6:00 PM until 8:00 PM. Mrs. Holland will lie in state at the First Baptist Church of Douglasville on Thursday, November 13, 2014 from 12:00 PM until 1:00 PM. Funeral Services will be conducted Thursday, November 13, 2014 at 1:00 PM at the First Baptist Church of Douglasville with Jamie Wynn and Daniel McAlpine officiating. Interment will follow at Meadowbrook Memory Gardens in Villa Rica with Mark Cagiano officiating. Messages of condolence to the family may be sent at www.jones-wynn.com. Jones-Wynn Funeral Home & Crematory of Douglasville is in charge of arrangements. 770-942-2311